Laurence Tureaud, better known as Mr. T, was an actor mostly known for his roles in the 1980s television series The A-Team and as boxer Clubber Lang in the movie, Rocky III. In the series, he played Bosco “Bad Attitude” (or “B.A.”) Baracus, an ex-army commando on the run with three others members (in their modded GMC truck) from the US government for “crimes they didn’t commit”. He is famous for his trademark Mohawk-style haircut and for the many gold chains he wears around his neck. His catch phrase, “I pity the fool!”, comes from Rocky III, where he played a boxer facing Rocky Balboa in a match. When asked if he hated Rocky, he replied, “I don’t hate Balboa, I pity the fool.”

It is my belief that Mr. T infact saw the Bling Era before it arrived with his OTHER famous quote: “I believe in the Golden Rule ” The Man with the Gold . . . Rules.” 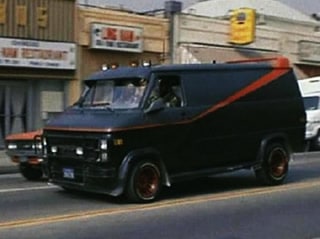 The A-Team van was a 1983 G-series customized by Universal Studios Prop Dept. The engine was a 350 cid with minor modifications done mainly to the carburator and exhaust system. The wheels are turbine style 15″ painted black with red accents with P235/65/15-fronts and P 275/65/15-rears. The main color is semi-gloss black-bottom, semi gloss dark gun metal grey metal flake-top with red striping. Other mod’s included a quad headlight conversion, full front brushbar, fog/driving lights, exterior sun visor (pimp!), quad square exhaust tips (each side in front of rear wheels), and custom made rear wing. Interior was custom-white naugahide bucket seats, shag carpet, and custom gun case in the back (Guns were Ruger Mini 14 stainless steel ranch model with side eject and paratrooper folding stocks-two were modified for full automatic). If you look carefully you’ll see 3M grip tape all over the roof for scene’s where stuntmen jumped onto it. It also had ‘beefy shocks’ air shocks in the rear-to improve handling. Scene’s burnouts were done by spraying bleach in front of and onto the rear tires which creates billowing grey smoke and helps it to spin the tires. The van (one of the six used for the show during its run), still sits-rotting on the Universal Back Lot, paint faded, for tram tourists to photograph – too bad, I wouldn’t mind one!