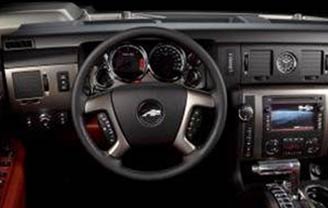 General Motors is readying an updated version of the Hummer H2, which is expected to debut at the Chicago auto show in the states this month. A single photograph was leaked to the DailyVoice today of what appears to be the revised H2’s all-new interior.

While its authenticity cannot be confirmed, the image appears to be the real deal. GM’s development team has put an increased emphasis on interior quality and styling with its latest round of redesigns, including some of itâ€™s other cars in production.

It’s not known if the H2 will also receive exterior design changes or powertrain upgrades. I like the look of this interior better than the previous one, especially since GM ditched those hideous bubble-like air vents on the old line of Hummers. Expect the updated Hummer line to reach our shores end year for the few oil investors that can afford them.