The 24th of March saw some top racing at Kyalami from various classes of car ranging from Shelby Can Ams right up to the Altech Porsche Challenge Unlimited. The weather played a big part in the day’s proceedings as the constant threat of rain made tyre choices very difficult. This was not really a problem for the slower classes but for the faster cars, driving skills were tested to the limit.

Well, now I can add this to the list of jobs I would love to have yet never will. This is a video of the Saab Performance Drive Team, a five-man team of full-time Saab employees who travel the world to demonstrate performance driving.

Mercedes Benz will unveil its sledgehammer CL65 AMG coupe at this year’s AutoRAI show in Amsterdam this week. Powered by a 6.0L V12 developing 612hp and an earth-moving 1,000Nm of torque, the new CL model is guaranteed to be a real crowd puller and may even manage to lure away some of BMW’s “M” faithful.

The 0-100km/h should take less than 4.5 seconds, while top speed is an estimated 300km/h although it’s unconfirmed whether the 250km/h speed limiter will be installed. Besides the addition of the mammoth engine, AMG engineers have also modified the car’s aerodynamic package and suspension including adjustments to the Active Body Control System. 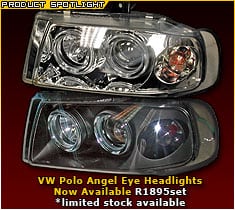 Over the years, Vw Polo enthusiasts have constantly asked us about a headlight upgrade for their rides. Alas our South African models where specifically made for us and although loosely based on the European Seat Cordoba & German-spec Vw Polo, our model varied a bit with the smaller add-ons. Bumpers, lights, lamps, etc all differed to our europeaan counterparts.

Good idea? Not quite, this meant that all the goods sourced from europe would need to be modified to fit correctly and most times end up looking far far away from an OEM fit.

That aside, we’v managed to finally get hold of angel eye headlights for the Vw Polo models. These chrome or smoked headlamps sport the popular angel eye rings along with a projector-type globe lense. Obligatory built-in corner indicators make this a perfect facelift to almost 10 year old Polo models. Stocks are limited so grab them while you can: Priced at R1895set (as of 24-03-07) Click here to view it at Autostyle’s Online Store

Kia is planning to unveil a new sports car concept at September’s Frankfurt Motor Show, and if successful could even start production of the new car by 2009. Kia’s chief designer, Peter Schreyer, is the man responsible for the original Audi TT and he’s reported to be employing the same techniques that he used at Audi to develop Kia’s latest designs.

The new project has been codenamed Project Snowflake, the TT project was known internally as Raindrop. An inside source has revealed that the similar naming practice is an indication of the link between the two cars, adding it will shock the world when it’s unveiled this autumn.

This will be Kia’s first sports car and would fill a gaping hole in the Korean carmaker’s lineup if produced. Power is expected to come from an all-new 2.0L turbo four-cylinder engine co-developed with Hyundai, which is also expected to appear in a sports version of the Cee’d hatch. The source also revealed that Kia was developing a new small hatch to rival the Ford Fiesta, which could be in showrooms by 2009. We hope the new cars follow the design direction previewed by the recent ex_ceeâ€™d cabrio concept. It showed that there’s definitely some potential for Kia to create an affordable and stylish range that could sell in high numbers.

The Zoopedup.com car club held their annual dyno day this past weekend at Dynotech tuning centre, Brackenfell. The meet up was a huge success with hundreds of car racers and stylists showing their support and getting their cars on the dyno. Proceedings started early in the morning when the Zoopedup car club convoy arrived from their N1 City convoy spot. One of the featured cars first on the rollers was a 6L V8 Lumina SS supercharged with gas pushing 400KWs and a wopping 915 Nm of torque. The car used extra straps to secure it on the dyno as the power was too much.

The Zoopedup Cape Town Dyno day was a huge success with hundreds of Zoopedup members showing their support. Full review article coming soon. Click here to view the photos of cars on the dyno, DJ Azoel and his breakdancers!

TRB performance, famous for their Subaru conversions, have moved from Benoni to the centre of Edenvale. They specialise exclusively in Subarus and have a wide range of accessories catering for every need. Looks and performance are well catered for, with TRB being an exclusive reseller of the hottest OZ racing wheels, NF Octane Booster and Mac tools.