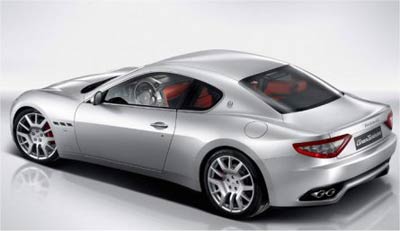 Italian sports car maker Maserati has seen turbulent times in recent years. Having been owned by various private and government entities during its lifespan, the company has been at pains to justify its sporting cachet by producing cars whose performance and handling, not to mention looks, live up to its early history. The purchase of Maserati by Ferrari and the subsequent introduction of the Quattroporte luxo-sport saloon in 2003 have seen an increase in sales and given a new lease on life to the Trident marque. 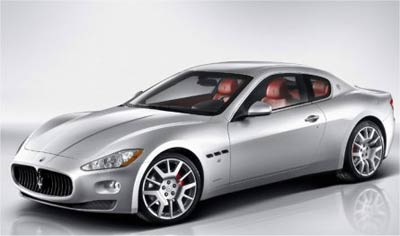 Enter the new Maserati GranTurismo; a grand tourer that is scheduled to replace the charismatic but somewhat dated GranSport coupe. True to the company’s tradition , the newcomer features a sleek, curvaceous side profile and pronounced gaping “maw”, all graced by Neptune’s fork at the front and on the C-pillars. The shape has been optimized to generate high downforce, with a flat underbody and rear diffuser, as well as a subtle integrated rear spoiler and hunkered-down suspension dynamics.

Although details are scarce at the time of writing, the initial press kit includes photos of high grade ox hides adorning the full 4-seater interior alongside customizable wood and carbon inlays. Maserati claims that over 4 million different customizations can be achieved by guided selection of different shades and textures of leather, and that is before one even considers technical modifications. Not that the Maser would lack any fire. Under the hood sits a 4,2 litre Ferrari-derived V8 mill that churns out a heady 405 Horsepower (about 305 Kilowatts) at 7100 revs-per-minute and a meaty 460 Newton Metres of torque at 4750rpm. The engine is mounted well away from the front wheels and closer to the bulkhead to give a weight distribution ratio of 49%/51% Front to Rear which, with the sports optimized suspension setup, should lend the GranTurismo rapier-sharp handling through the twisties. The GranTurismo makes no pretences about its sporting pedigree, with the 0-100km/h sprint dispatched in 5,2 seconds and top speed pegged at 285km/h.

The Maser should get to S.A. soon…my guess is between the third quater of 2007 and first quarter of 2008. What’s more, an even more sporting model might be on the cards, featuring a 4,7 litre V8 powerplant. Indeed, the future looks bright for Maserati. Let me know what you think and leave a comment! More details on carblog soon..