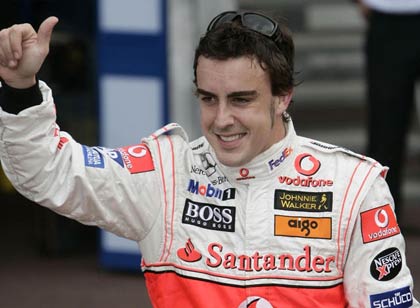 They came, they saw, they conquered. The McLarens, that is. Fernando Alonso only lost the lead to team mate Lewis Hamilton during the pit stops, and then not for long.

The rookie, meanwhile, fended off Felipe Massa at the start and successfully rode shotgun, never quite able to launch a challenge, all the way to the flag. The silver cars arrived there four seconds apart after their 78-lap demonstration run, and it was another 65 seconds before Massa’s Ferrari crossed the line.

It was a rout, even if it wasn’t a classic race. The expected rain never made an appearance after the clouds had come just before the start. And with Giancarlo Fisichella taking fourth place, the leading four positions on the grid were the same by the finish.

Fifth and sixth places fell to the ever-reliable BMW Saubers, a super-long first stint finally putting Robert Kubica ahead of Nick Heidfeld as both employed single-stop strategies. Alex Wurz did the same for Williams, but team mate Nico Rosberg’s promising early run came to nought with only 12th place after two pit stops.

Right behind Wurz in the final stages came Kimi Raikkonen. The Finn made up four places immediately to jump from 16th to 12th at the start, but was then bottled up for half the race behind Jenson Button’s fuel-heavy single-stopping Honda. Eventually he got clear courtesy of his own single-stop strategy, to claim the final point.

Behind him, Scott Speed drove smoothly and strongly for ninth, stopping only once, to head home Rubens Barrichello and Button. Behind Rosberg, Heikki Kovalainen had small consolation after their qualifying incident in beating David Coulthard. Both were two laps down, Coulthard losing pace thanks to a damaged front wing, as were the Toyotas of Jarno Trulli and Ralf Schumacher and the Super Aguris of Takuma Sato and Anthony Davidson. The Briton’s chances of beating his team mate were thwarted when he was given a drive-through penalty for ignoring blue flags.

Mark Webber’s chances of points were damned by gearbox failure when he was fighting Barrichello and Kubica for seventh early on. Both Spykers also failed to make it home, Adrian Sutil hitting the barriers and Christijan Albers with technical problems, and Tonio Liuzzi was out after the first lap after crashing into the wall at Massenet following an early assault by Coulthard which damaged his Toro Rosso.

Alonso’s superb victory, his second of the season, puts him at the top of the drivers championship table again with 38 points, while Hamilton’s hard-fought second – on his first Formula One visit to the Principality – gives him the same score but he is officially second since Alonso has won in 2007 and he has yet to. Massa is on 33 points, and Raikkonen 23. In the constructors stakes, McLaren have 76 points to Ferrari’s 56.