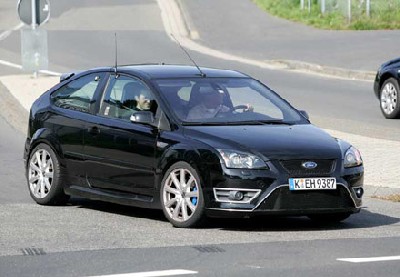 Although there have been spy photos of the proposed new Focus RS Mk II earlier in the year, it has now been reported that Ford has planned to ditch the production of it.

According to reports, the Mk II which was planned for late 2008 was ditched because of concerns over CO2 emissions. On the other hand a spokesman has reported it was canned because any car that is brought to market has to be profitable and there was not enough demand across the globe besides the home of the RS which is Britain where the Focus RS Mk I was well received

The Focus RS Mk II was rumoured to have at least 300bhp (225kW) and four wheel drive. This would have at least made it a serious competitor for the Subarus and Mitsubishi Lancer Evos.

The Focus RS Mk II would have been probably one of Fords first performance cars that would have troubled most big players since the Escort and Sierra Cosworth that was last produced in ’80s. The Cosworths had the legendry YB series of engines which started out at a mere 204bhp (153kW) but the RS500 engine was exceeding 550bhp (412kW). Many road going YB engines have been tuned over 750bhp (563 kW). With the likes of Honda being renown for producing v-tec engines that offers more than 100bhp per litre in standard form, it is actually the YB engine to be the first engine ever to do so.

Unfortunately South African Ford fans have not had the joys of buying Cosworths from main stream dealers and once again wonâ€™t experience a true performance Ford hot hatch, as the MK II RS has been ditched.

However, there is still hope for the fast Ford fans. It is not to late for Ford to change their minds about the MkII or a potential RS version of the Mk III Focus, due in 2010, are possible . And even if it is possible, will it come South Africa? Hope and see.