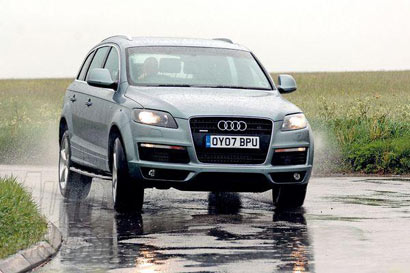 Size matters. Or at least that seemed to be Audis philosophy when it came to developing its first off-roader. The Q7 is massive: 250mm longer and 68mm wider than the Discovery with a wheelbase of more than three metres.

It only looks small when parked next to the Land Rover in our group shot because its comparatively low at 1,737mm. Trouble is, unlike most other Audis, which tend to be neat and handsome, the Q7 isnt particularly well executed. The heavy flanks and tall nose make it look big, bulky and cumbersome, while its sheer size means the styling comes across as clumsy BMWs decision not to follow suit and build an equally large machine seems to be a clever move.

But can the Q7 win back points inside? Theres no denying its spacious not even the Land Rover could match the Audis 2,040mm maximum load length, while the X5 fell 155mm short. The one-piece tailgate makes the area more accessible, too were it not for the high load sill. Even with the air-suspension lowered, the boot floor is 830mm above the road, and when you combine this with the low roofline, the height of the cabin is limited. That hampers maximum load volume, and is also bad news for headroom.

The rearmost seats are standard in the Audi Q7, and they undoubtedly offer more knee clearance than the X5s although adults will still be sitting with their legs splayed. Access is awkward, too, but more puzzlingly the middle row features a shorter, narrower and harder centre chair, which quickly becomes uncomfortable. 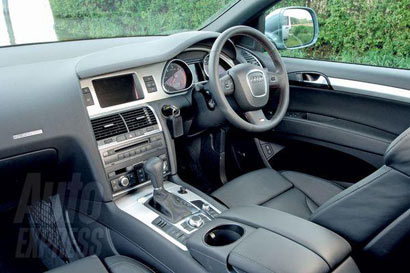 The front seats arent particularly well padded, either this S line model features sports chairs that increase support, but arent so cosseting. As with the X5, there are few reminders that youre sitting in an off-roader the layout is similar to the A6s yet Audi hasnt overlooked its legendary construction standards while building the cockpit.

Unfortunately, it didnt put enough thought into the view out. The combination of swept-back A-pillars and vast door mirrors means forward visibility is a real weak point. This, combined with the Q7s sheer size, makes it extremely tricky to manoeuvre around town.

Urban settings dont exactly give the engine much space to breathe, either and the 3.0-litre V6 diesel is at its best when allowed to stretch its legs. At low speeds, theres too much noise intrusion and the sluggish throttle response is more noticeable, but with 500Nm of torque at 1,750rpm, the Q7 has impressive overtaking ability provided the road is wide enough.

Yet the engine isnt as cultured and well mannered as either rivals, and similar criticisms can be aimed at the suspension set-up, too. Equipped with 20-inch alloys and low-profile tyres, its no wonder the Q7 has a lumpy, thumpy ride. Even with the air-suspension in comfort mode, its not very cosseting. 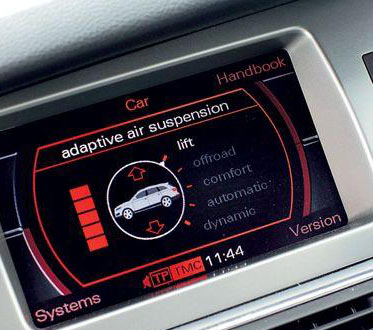 The well insulated cabin and raised seating does a decent job of distancing you from the world outside, but the suspension undoes that good work. Its not as if the Q7 handles brilliantly, either. Admittedly, its far more responsive than the Disco, with limited roll and precise turn-in, but it feels skittish unlike the BMW, it doesnt seem to have a proper grip on the tarmac.

The Q7 range starts from 37,285, so it undercuts the X5. But both models have costly and extensive options lists the extras added to our Audi raised the price by nearly 7,000.