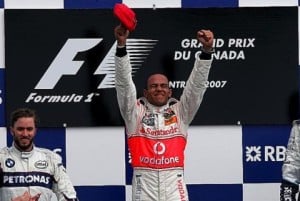 As Hamilton resumed the lead, Heidfeld got the jump on Alonso, who just kept Felipe Massa at bay. The Brazilian had been assaulted lightly by team mate Kimi Raikkonen in the melee, and lost a place to Nico Rosberg.

The first safety-car came when Spykerâ€™s Adrian Sutil smacked a wall out the back of the circuit on lap 22, the lap on which Hamilton first refuelled. Alonso and Williamsâ€™ Nico Rosberg came in on lap 23, before the pit lane was officially opened, and would subsequently drop down the order after serving their resulting stop-and-go penalties.

After the track went clear again, Kubica had a horrible crash in the very quick left-hander prior to the hairpin on lap 27, his BMW Sauber hitting the outside wall and then rolling all the way down to the hairpin entry. As the safety car came out again the Pole was released from the wreckage, mercifully conscious and lucid, and was hospitalised with a suspected broken ankle.

It was a chaotic race, but Hamiltonâ€™s finely judged victory and set him back in the lead of the world championship, with eight points over Alonso, and 15 clear of the disgruntled Massa. In the constructorsâ€™, McLaren extended their lead over Ferrari to 28 points, 88 to 60.