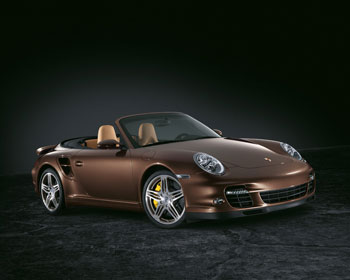 Porsche’s iconic 911 range has , since its inception in the early Sixties, been the benchmark by which other sports cars are judged by many. The cars embody the manufacturer’s notable dedication to epic performance backed by astounding reliability and provocative soundtracks. These traditions continue with the latest 997 911 Turbo Cabriolet, a soft-topped version of Porsche’s turbocharged all-wheel-drive supercar. 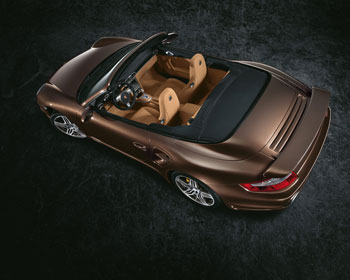 Featuring the same 3,6L 6-Cylinder “Boxer” as the hardtop car, the Cabriolet pumps out a heady 353Kw (480 Horsepower), thanks in no small part to the company’s new VTG (Varable Turbine Geometry) system that continuosly monitors and adjusts vane angles for the two turbochargers and controls boost application. This means that the old bugbear of monstrously powerful turbocharged 911s, turbo lag, is all but eliminated, as though there were a small turbo for lower revs as well as a more aggressive vane patten for high engine speeds.

Performance is quoted at 3,8 sec 0-100kmh for the Tiptronic version and 4.0 sec for the 6-speed manual. Top speed is over 300kmh. While achieving this kind of performance, the 997 Turbo Cabriolet offers good fuel frugality and modern emissions standards.