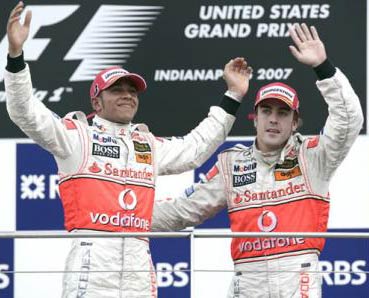 It is being reported that Alonso and Hamilton are in some kind of a feud, after a couple incidents that caused, the already bitter rivals, to stop talking to each other. No doubt that it was not just the work of yesterdayâ€™s incident, but a long standing problem between Alonso and Hamilton. What yesterday and on Saturday happened was very childish and irresponsible by both of the Mclaren Mercedes drivers. In Saturdayâ€™s qualifying, Alonso was found guilty of blocking or hindering Hamilton in the pit lane from doing another run at Alonsoâ€™s best time. Alonso was thereafter penalized for his actions and pushed back to the sixth starting position, losing his pole position he actually qualified for.

Hamilton has said that he respects Alonso, but it seems to him that after the race in Hungary, Alonso has stopped talking to him.

Another potential reason for Alonsoâ€™s frustration is that he has not been guaranteed the number 1 title in the Mclaren team, thanks to Ron Dennisâ€™ principal of equality.

The rumors are that Alonso may leave the Mclaren team and go back to his daddy – Flavio. I think he is just a sore loser and canâ€™t handle the fact that a newcomer and his teammate may take his title away.