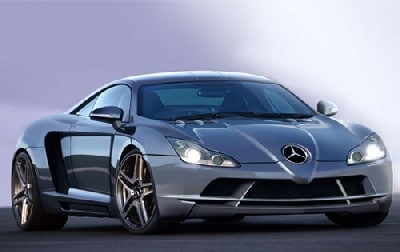 Mercedes-Benz is to launch an all-new mid-engined supercar called the SLC, to rival the Audi R8 and this was further confirmed after spy photographers caught a mule disguised as a longer wheel based Dodge Viper, in some Californian canyon country side recently.

This super-coupe will be developed by AMG and tweaked and tuned by HWA (Hans Werner Aufrecht), which will also build the car for Mercedes at its facilities in Affalterbach. HWA was the motorsport division of AMG prior to Mercedes-Benz taking a major stake in AMG, and has since been independent. It has been running the team for Mercedes in the DTM German Touring Car Championships and it is quite successful. HWA is also now tipped to take over from McLaren as Mercedes’ new partner in the development of upcoming top-end supercars. HWA does have some serious credentials in motorsport as they have a large history with AMG. HWA also have been creating cars for FIA GT1 motor sport as well. Back in 1999, DaimlerChrysler acquired AMG, renaming it to Mercedes AMG GmbH. In doing so, they effectively separated HWA from AMG developments. This left the 170+ employee firm with independence over its products. Such freedom has let HWA produce phenomenal cars such as the the very limited edition CLK GTR roadster in 1999.

McLaren, on the other hand, looks likely to develop a new supercar of its own as well, funded by profit from its successful Formula One enterprise and billed as a natural successor to the Gordon Murray-designed McLaren F1.