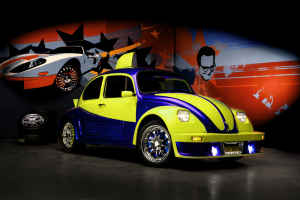 Here’s one more “Pimp My Ride” project vehicle that’s up for sale. Gus, a reader of Carscoop, discovered Lawanna’s VW Bug that aired on MTV’s Pimp My Ride Show episode 414, on the Los Angeles area Craiglist. The seller we don’t know for sure if it’s Lawanna, is asking a mere $40,000. Not bad at all for a rustbucket on wheels that was half-way to the scrapyard before Xzibit took over.

The VW Beetle’s theme was “Hair Force One” due to the fact that Lawanna was a hair stylist who was about to enter the air force. Among other things that the GAS crew did, was to install a sink with shampoo and conditioner dispensers in the front, as well as waterproof speakers and an iPod nano. Inside the car features a high-power hair dryer that got air via a scoop on the car’s roof.