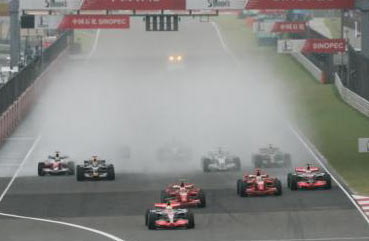 Vodafone McLaren Mercedes driver Fernando Alonso finished the Chinese Grand Prix in Shanghai in second place. Whilst his team mate Lewis Hamilton retired, when he went off and got stuck in the gravel with worn wet tyres on a drying track. Kimi RÃ¤ikkÃ¶nen took victory, so the championship will now be decided among those three at the final race in Sao Paulo in two weeksâ€™ time. After 56 laps in changeable conditions, 305.066 km and a total race time of 1:37:58.395 hrs, Fernando came home 9.8sec behind RÃ¤ikkÃ¶nenâ€™s Ferrari. Despite his first retirement in 16 Grands Prix, Lewis maintained his lead in the Driversâ€™ Championship after 16 out of 17 races with 107 points followed by Fernando in second position with 103 points; RÃ¤ikkÃ¶nen is third on 100 points with 10 points available in the remaining race. For the first time since 1986, there are three drivers to fight for the title in the final race.

We managed to get some comments from the Mclaren team

Lewis Hamilton
â€œWhen I got out of the car I was obviously gutted for both myself and the team. I haven’t made a mistake all year but I am over it now. There is still one race to go, so I can still do it. I made a strong start to the race and my first stop went well. Prior to entering the pit lane for my last stop, I was constantly talking to the team. Although my tyres were in poor condition, we took a joint decision to get through the last rain shower before changing to dry tyres. I was trying to be very careful and as a result was not really fighting aggressively with Kimi. It would have worked out perfectly, but I then made a mistake coming into the pitlane and that was it. We made the right decision, and it was just unfortunate. I will now focus on attacking in Brazil where I will do everything I can to bounce back.

Fernando Alonso
Today was a very good result for me. I had a battle with Felipe at the start, but unfortunately, I was not able to finish the first lap in front of him. As a result, I lost a lot of time behind him in the first stint because there was a loss of downforce when following him in the high speed corners. It was difficult towards the end on the wet Bridgestone tyres as they were practically slick, but we stayed out as long as possible to get through the final shower, which was the right decision as I was able to come out ahead of Felipe on my final stop. Although this result is a boost to my chances in the Championship, it is still not going to be easy. However I will not be giving up until the chequered flag in two weeks time.

Ron Dennis
The start of the race saw everybody being careful not to make any mistakes. Lewis pulled out a healthy lead and stopped a little earlier than both Fernando and the two Ferraris. All of these cars stayed on the same set of tyres, which was clearly the right decision. Like us, our competition was hoping to get through the last period of rain before changing to dry tyres. Lewis stopped first but a combination of tyre condition, the wetness of the pitlane and a small mistake saw him run wide into the gravel trap. Fernando’s second stop took place on the following lap and he drove an excellent race to put himself firmly back in contention for the World Championship. As always we will now focus on the next Grand Prix and with both Fernando and Lewis having a points lead over Kimi it should be an interesting end to the season in Brazil.