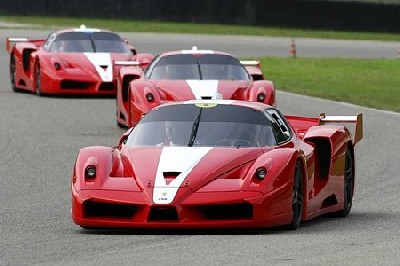 Most, if not all Ferraris are developed on the twists and turns of Fiorano. But its safe to assume that the most track focused production car that Ferrari has ever produced, the 430 Scuderia (although based on the F430, the F is dropped) has spent more than the average time being thrashed around Fiorano in its development.

Fiorano Circuit is the private track owned by Ferrari for development and testing purposes. It is located near the Italian town of Maranello.

It’s 3.1Km long. Average F1 lap speed is over 160 Km/h and top speed of only 290 Km/h. Because it’s a testing track, it has many different kinds of turns and corners, with corner diameters between 13 and 0.3 meters. All in all it has a lot of similarities with most European GP circuits. Fiorano has witnessed many great Ferrari drivers at work such as Lauda, Prost, Mansell, Alesi and of course Schumacher. Also youâ€™ll find many tourists clawing on perimeter fences hoping to get a glimpse of a new model being tested. And most people say if you more than lucky to be in Maranello when the F1 team is testing, you are bound to hear the sound of the cars wailing at 19000rpm echoeing through the town from far on the Modenese wind.

However, like the Nurburgring, there is much myth and mystery surrounding lap times at the circuit. Some are official and others not as they are posted by various drivers or the very lucky few journalists like Fifth Gear’s Tiff Needell that gets invited to the track, of which a video can be seen on a earlier post on CarBlog.

So coming back to the shoot out, here is a sample of the current times held at Fiorano:

So it can be seen the 430 Scuderia is as fast as the Enzo and the 360CS as fast as the 599 which is extremely impressive. But due to nature of the turns at Fiorano, the Enzo struggles to get to its limit. On any other track with longer straights the 430 Scuderia might be in the shadow of the Enzo and who knows the 360CS in the shadow of the 599, but never the less they up there with the best of them besides of course the old V10 F2004 of Schumacher (as apposed to the new F1 V8s ) which just seemed to have been in a league of its own with a whopping 55.9 seconds record that still stands today.