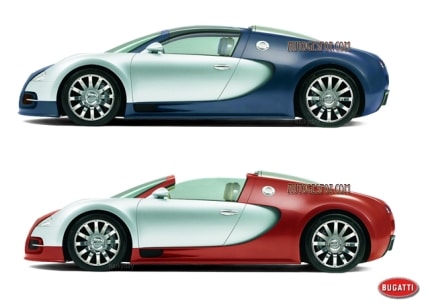 The market is full of Bugatti Veyron rumors with new models rendered but nothing real. However, our sources today have just announced they have inside people that confirmed the new Bugatti Veyron Targa -the topless Bugatti – is already live and running (they’re probably testing it) with sales starting next year.

We all know that a Veyron can reach 400km/h but this is not going to happen with Veyron Targa because it will be limited to 340km/h, but don’t worry this convertible will put a lot eyes on you if you drive it. One small drawback: Ã½ou can’t take the Targa panel with you when you drive open.
Rumors say that Bugatti ordered 400 engines and that all orders have already been filled out.

Let’s see if this rumor confirms.