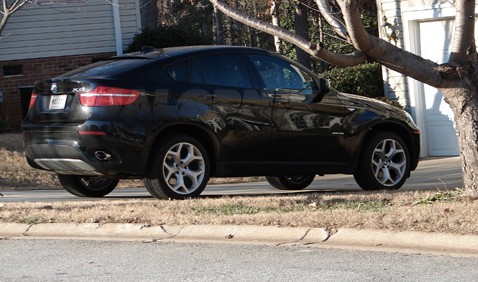 If you remember the BMW X6 model I told you some time ago, then it’s time to see it in flash. Apparently a guy living in the Upstate are of South Carolina, where is the BMW Manufacturing, managed to spy (probably the first) production version, a black xDrive35i model. The car is supposed to be a tester, and was taken back home by a BMW manager.

Here is what the guy had to say about it:

From a distance the car appears to be smaller, almost sedan sized, until you get close to the car.I’m about 5’10” tall and the top of the X6′s rear hatch hits me about mid chest. Then you realize this is a fairly large car and related to the X5.This car looks much,much better in person.The photos just don’t do it justice. The car has an awesome street stance and presence.