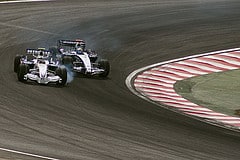 I’ve just heard that the Australian Grand Prix from Melbourne might be canned, because Bernie Ecclestone, the owner of Formula One might have a deal in Russia. Last weekend he had talks with Government officials in St. Petersburg that included a new circuit to be used for a Russian Grand Prix. Rumors say that the Australian organizers refused to become a night race circuit and this may be the reason why Bernie won’t renew their contracts beyond 2010.

India is going to debut in F1 in 2010 and if Russia replaces Australia then Formula One could be dominated by Asian Grand Prix events by the end of the decade.