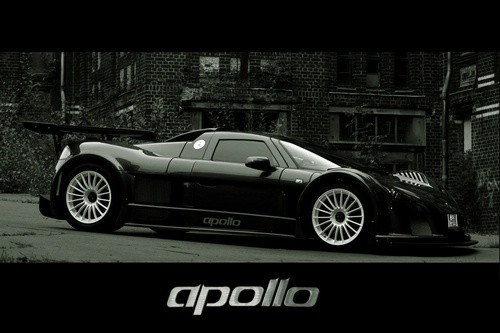 News are coming in about the March Auto Show that a new super car is going to be down on the floor, a Black Gumpert Apollo. I first heard of it in 2006 when during the same motor show a 641hp Gumper Apollo was presented. Later, in 2007, the company came with a race-ready 800hp Apollo Sport.

What will happen this year? Apparently they will not come with a new version but will change the colors. They will bring two models that will be black. Thought the story is official there’s no official photo to show you guys, so a Photoshoped version should do.

“Apollo enjoys a very strong interest. Currently, talks are underway both in Germany and abroad. This year we are planning on establishing at least three domestic distributors.” said Roland Gumper.

The whole team of the Gumpert Sportwagenmanufaktur is waiting eagerly for the greatest event this year – the Motor Show in Geneva. From 6 to 16 March, more than 260 exhibitors will revive 83,000 square meters net space. Among them: the Gumpert Sportwagenmanufaktur. Look forward to the both breathtaking brand-new black apollo. Visit us in hall 2, stand 2141 and use the opportunity to become acquainted with our two new exclusive distribution partners for German-speaking and French-speaking Switzerland.