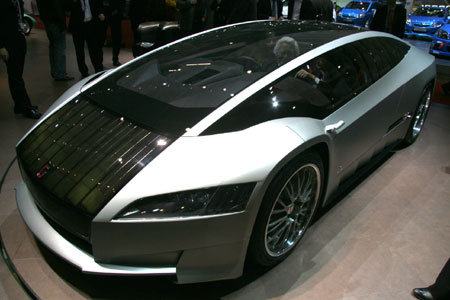 Geneva has all kind of goodies this year. Here is Automotive Designer House Giugiaro that came up with the Quaranta hybrid concept that almost killed a few of us when they unveiled it. The new Quaranta is using a Hybrid system that was developed by Toyota together with Honda and is actually based on Lexus’ RX400h Hybrid Crossover.

Giugiaro Quaranta is running on a 3.0L V6 engine that sports 286 bhp and 288 Nm of torque, is able to go 0 to 100 km/h in about 4 seconds, uses Toyota’s Hybrid Synergy Drive system and a CVT transmission. These are all great specs and I don’t think much could be said about the exterior. Yes it’s true Quaranta is a little low but the smart suspension can raise it 230mm if needed. The roof seems to have solar panels to charge the batteries and power the electronics it has inside.

It’s a great supercar concept, what do you think?