This year’s 2008 Monaco Grand Prix was a real challenge as bad weather continued to change the race. Even the winner Lewis Hamilton and Mclaren were dominated by the weather on lap 5 when Hamilton’s Mclaren hit a barrier puncturing his right-rear tyre forcing him into an early pit stop. He managed to come back and win the shortened event, after his 76th lap, BMW’s Kubica coming in 2nd and Ferrari’s Massa 3rd.. 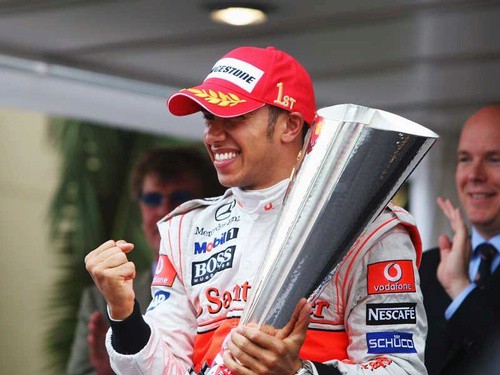 The race was wet at the start and saw many mistakes and errors take place, however these conditions did not continue and we saw the track start to dry, the weather kept looking like it was going to rain but it just never happened. As the drivers and manufacturers didn’t have the privilege of time, travel they had to decide what tires to use, intermediate or dry. Most drivers went with dry tyres and this decision ended up paying off.

Because Lewis had an early pit stop it meant he had enough fuel to gain the lead while the others had to have pit stops during the middle of the race. Eventually he had a good 40 second lead, which was all undone by Nico Rosberg’s bad crash on lap 61. The safety car came out for a few laps and then the race continued. On lap 69 Kimi Raikkonen ran into the back of Adrian Satu who was sitting in comfortable fourth and then disqualified. This is being looked into. The race was then continued with Lewis Hamilton and Mclaren taking the win. This was a great race to watch! Can’t wait till the Canadian Grand Prix starts!

Renault Megane III is one of the “biggest” French cars expected to be unveiled at the 2008 Paris Motor Show. Pictures leaked online, but seem to unclear to make us go ‘oooohhhhh’ with excitement. So here are some of the new features that will hopefully take the fill that gap for you. 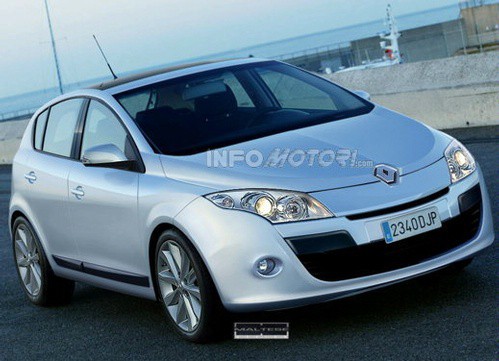 The first and most obvious feature you will notice about the new model hatchback is the better design. It is very similar to that of the Twingo and Laguna and I’m sure with its stylish look you will see other car companies soon follow suit.

There are 4 versions of the Megane coming out: station wagon, sedan, 3-door and a 5-door. The higher priced models may have a 2 litre turbo able to deliver 225bhp, standard models are 1.4 litre, 1.6 litre and 2 litre petrol engines and 1.5 litre and 2 litre diesel engines, all with four cylinders. Sales will take place soon after the first presentation of this car and at anywhere between € 15,000 to about € 30,000 someone will be having a ‘good’ day. I think this is defiantly one to keep your eye on, until we have the official pictures.

The official pics of the California GT have been released and soon enough it will be launched at the Paris Motor Show in October. This mid-sized roadster will only be built as a convertible with Ferrari‘s first folding hardtop.

Ferrari always being renowned for its power and performance does not disappoint with the California GT with its 4,3 litre direct injection V8 engine producing 460bhp, mounted in the mid-front. This prancing horse can reach 0-100km/h in less than 4 seconds. 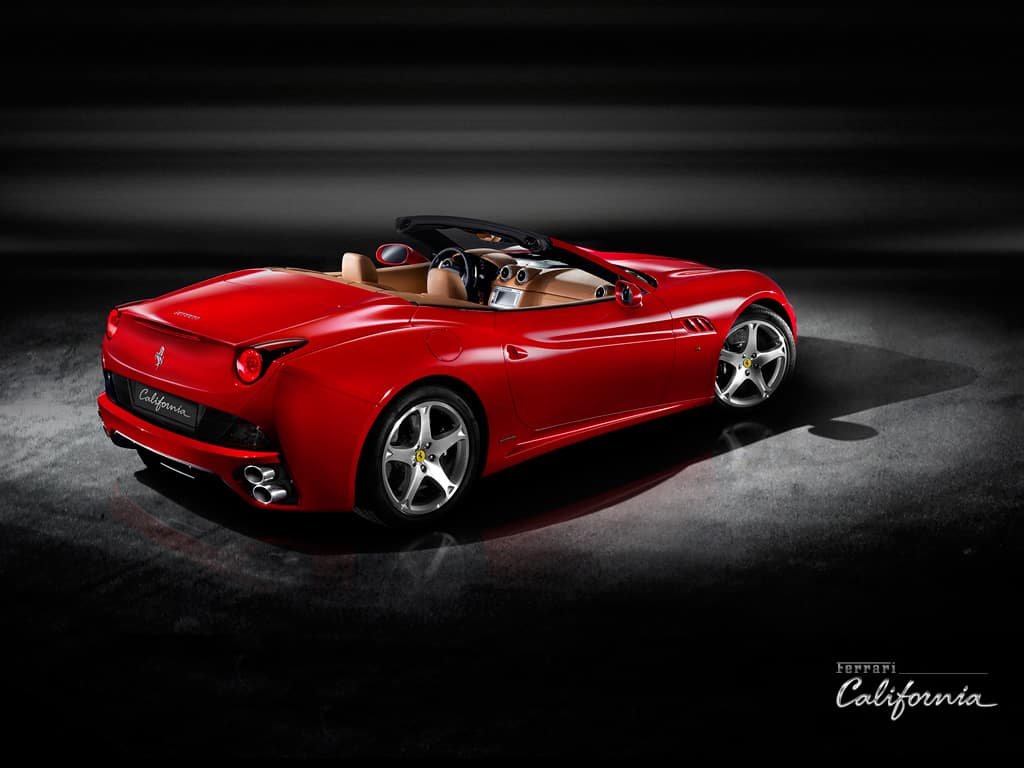 Its gearshifts are via a seven speed dual clutch transmission with F1-Trac traction control. It also houses Brembo carbon ceramic brakes which should help to bring this speedy horse to a sudden stop. Also in keeping with the rest of the new generation Ferrari’s, it will be built on an aluminium chassis as well as aluminium body panels.

More details about this car is expected to be releases prior to the Paris Motor Show. In the meantime join in on the Ferrari California GT countdown at www.ferraricalifornia.com

Petrol price increases might affect the way we commute! 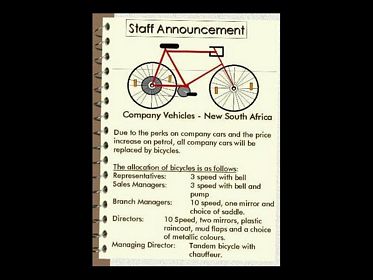 Recent petrol increases have left many South Africans in fear of a visit to the petrol pumps. This might also have an affect on the way we plan our business meetings with more attention to saving on time and travel.

The effect on road safety has not been measured – but common sense dictates that their will be less unnecessary travel and speeding. The Arrive Alive website received this light hearted image pointing towards companies restructuring their travel benefits. Perhaps we will need to focus more on cycling safety in the next few months..!! 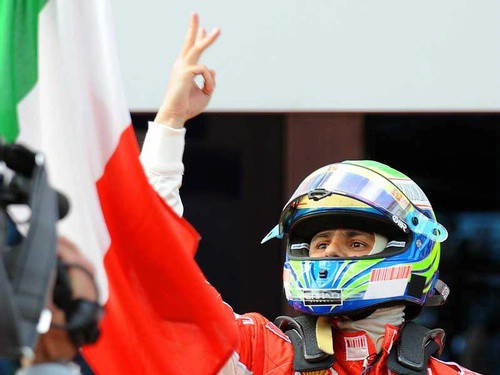 Brazilian pilot Felipe Massa won the Istanbul Grand Prix, for the third time in a row and managed to send Ferrari in the first place for constructors consolidating their leadership, while he is second in pilots championship. The podium was completed with Lewis Hamilton (McLaren) who was 3.7 seconds slower and then followed by the other Ferrari pilot, world champion, Kimi Raikkonen just half a second behind Hamilton.

Massa was in pole-position at the start and finished first when the checkered flag was waved. Istanbul is the first grand prix ever won by the Brazilian pilot, so it’s obvious why he ended up with a passion for Turkey.

Here are the results of the Turkish Grand Prix:

Regular readers will probably remember when we told you that Opel Insignia is getting official or the Opel insignia pictures. We even got a few messages that you really like it, so when I first saw the Hatchback version I knew this is definitely a must, to show you.Because I can’t see any sign of camouflage, it could mean that this model will hit the market at the same time with the sedan. Rumors say that an estate variant version is in the works and GM will release it next year.

There aren’t any big design changes except that the Opel Insignia Hatchback has an bigger rear window. Just like the sedan it will be equipped with seven engines to choose from, front-wheel-drive and all-wheel-drive systems. 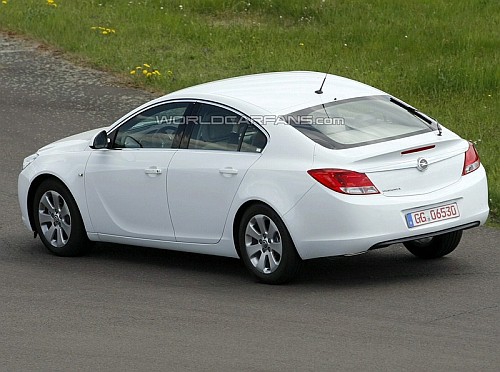 I can’t wait to see it on the streets. Do you? 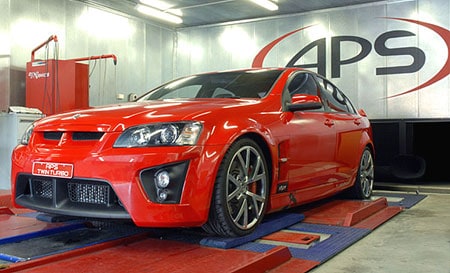 APS is renowned for tuning cars up to extreme and this is exactly what they did with the new Pontiac G8 GT. They are using a Stealth Intercooled turbocharger (the ultimate intercooled twin turbo system) setup with two water-cooled turbos mounted deep into the engine bay.

The modifications these guys have made, turned the new Pontiac G8 GT into a real beast that  produces 557 hp and 583 lb.-ft. of torque while running 93-octane. We don’t have a price from APS but I wouldn’t count for anything cheap.

The Mitsubishi RA concept epitomizes the meaning of sport coupe. The two seater concept has a striking body that sits neatly on a set of 21-inch wheels. The concept RA is said to be built on a lightweight aluminum space frame with high impact resistance resin body panels which turns out to be environmentally friendly as it is fully recyclable. It features a four cylinder 2,2 litre turbo diesel engine boasting a maximum output of 150kw. This power will be grounded with Super All Wheel Control (S-AWC) and the twin clutch SST automated manual transmission taken from the Lancer Evo X which debuted at the Tokyo Motor Show. The S-AWC allows for improved braking and control over drive torque which ultimately results in all round better cornering, traction and vehicle stability on road. Based on looks alone this is a masculine car with its matte black hood and sharp looks.

It reminds me a bit of the Audi R8 though.