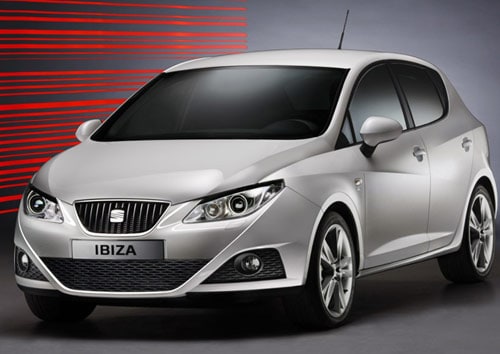 The much anticipated new Seat Ibiza makes its debut in Madrid on the 22 May 2008 after which it will be launched on the European market. Designed by the much acclaimed former Lamborghini designer Luc Donckerwolke, great things were expected. The design like its predecessor is typically aggressive in appearance and defined by its crisp lines and curves distinctive to the Seat family.

The Seat Ibiza once again shares its underpinnings with the upcoming Volkswagen Polo which is expected to be launched after the Ibiza. The Ibiza being built on its ‘Agile chassis’ boasts supposed better handling for improved cornering with solid road holding capabilities. The car is also slightly longer at 4,05m compared to the current Ibiza’s 3,97m therefore providing the much needed legroom in the rear of the cabin as well as a more practical amount of boot space.The Ibiza is also rumoured to possess twin clutch DSG gearboxes, active headlamps, USB connectivity, hill-hold assist, side airbags, ESP amongst other driver aids which are normally equipped on bigger cars.

South Africa’s launch date is yet to be announced but can be expected as soon as the end of this year.