Indian farmers from Singur, in West Bengal, have started violent protests against the government and the Tata Nano plant that was supposed to be built on their lands. Some 1,000 acres have been “taken” from farmers which where offered compensations, but not all of them agreed with that proposal, leaving Tata with a hard decision to take. 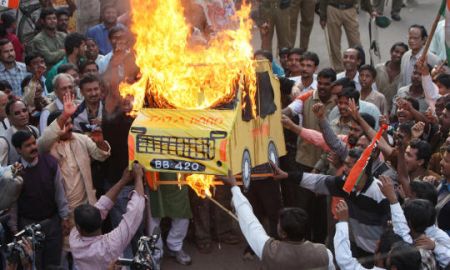 “What has concerned us is the violence, the disruptions, that has led us to be concerned about the safety of our employees, our equipment and investment, and of the viability of the process,” Chairman Ratan Tata told reporters in Kolkata, the state’s capital, on Friday. “If anybody is under the impression that because we have made this very large investment of 1,500 crore rupees ($350 million), that we would not move, then they are wrong, because we would move to protect our people,” he said.

Even though such a protest could hurt the image India has to potential investors. If the outcome turns out to be negative, that could mean that big car manufacturers will think twice before entering that market (if they will).

We shall find out if Tata has a plan B for their $350 million investment in West Bengal. They’ll have to choose fast this time.