We all know what’s the most successful hybrid of all times: Toyota Prius. But what we don’t enjoy very much is that it has a boring design. Things changed when Claes Gustafson and the crew at Classe’s Garage got their hands on one and created what you can see below for a Swedish TV show. And yes, that’s a Toyota Prius. 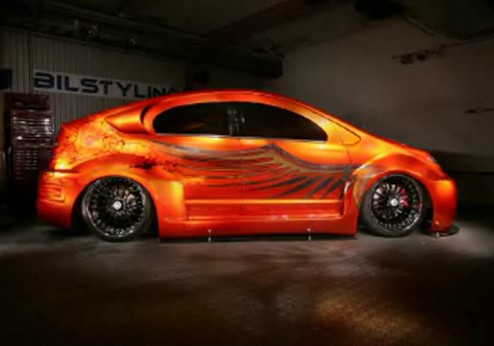 Even though the outcome is spectacular, it involved HARD work because there’s no body kit available for the Prius and they had to start with a modified Volvo XC90. They also removed the back doors and installed custom made knife doors for the front, installed a carbon fiber venturi, air suspension, 20-inch wheels and over-sized front brakes.

They didn’t work just on the tech part and the interior got improved, too. It has a central console with a custom dashboard and a 4,400-watt stereo system. However that’s not all because this hardcore Prius also features 15 LCD panels and a tablet PC for Wireless Internet.

“The goal … was to give the viewer a great show and, second, to show that a Toyota isn’t a boring and anonymous car,” Claes Gustafson told Wired. According to him, the whole idea was “to show that every car can be styled.”

My biggest concern if all these things can be supported by those 4 batteries.