I really love it when new supercar concepts are being announced. No matter if they turn out to be the real deal, the thing is we get to see (most of the time) something new for our eyes and that’s a good thing. Last week Maserati tried posted on their website ““We are going to surprise you”. And that is ahead of the Paris Motor Show, so I knew it’s going to be … hot.

Here’s what they were talking about. The new Maserati GranTurismo MC Corse concept. Based on GranTurismo S, the Italian designers made this one for the racetrack but I’m sure if the response is higher than expected, a street version will be built.

Using the lightweight 4.7 liter V8 engine in the S version, the new MC Corse output nothing less than 450hp. They’ve also worked on a better suspension system, larger brake discs with monobloc racing calipers and a rollcage that was approved by the FIA. The engineers upgraded it with an air intake, competition-spec catalytic converters, revised airflow and a new exhaust system. The outside also got a body kit with a new front spoiler an enlarged rear spoiler, road hugging rocker panels, 18×12-inch front and 18×13-inch rear wheels. Sure looks nice. 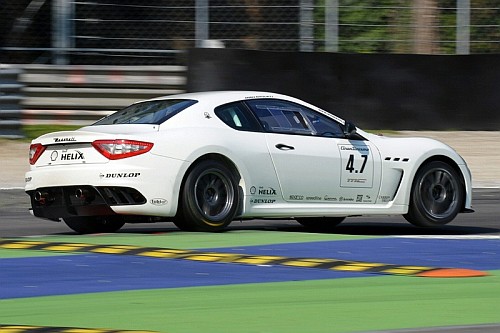