The much anticipated F430 replacement of Ferrari, the 458Italia has officially been unveiled as the next super car which has been described as massive leap forward and a genuine departure from the current range. The latest super car comes with an aerodynamic shape that takes car of the drag and improves down-force (140kg at 200Km/h). The front end is the most interesting part with bold grilles and aero-elastic winglets. These winglets generate down-force and, as speed rises, deform to reduce the section of the radiator inlets and cut drag. 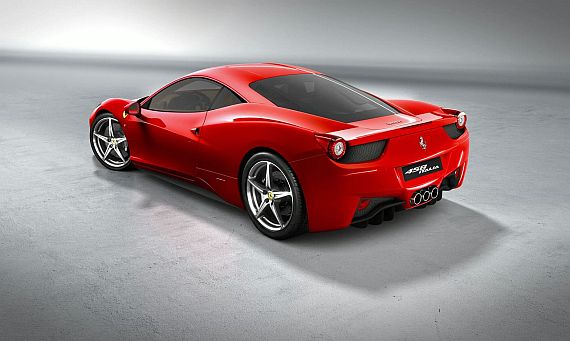 The engine cooling for a super car is a priority and the car features small openings between the hood ad headlights for added cooling. At the rear of the car is a massive diffuser with California-style lights and there centre-mounted exhaust tips. Powering this scorcher is a 4499 cc V8 engine that produces 570 hp at 540Nm of torque and this combination is mated to a seven-speed dual-clutch transmission. As a consequence it pelts from 0 to 100Km/h in less than 3.4 seconds and succeeds in topping it out at 325Km/h.