I recently took the new VW Golf VI for a ride to see how much has really changed since the Mk5. After the success of the Mk5, it was clear that the Mk6 had much to live up to.

The moment I left the driveway I could tell the ride is much softer than it was which made me a bit concerned as to whether it would have any effect on handling. I am happy to report that is not the case. The Mk6 now features VW’s EDL (Electronic Differential Lock) which works by applying pressure to front inner wheel exactly where it is needed on fast cornering to prevent spinning. This maximizes traction, reduces under steer and improves response.

The Mk6 manages to achieve a perfect and subtle blend between performance handling and comfort driving. Under intense driving the GTi has a steering pulse which alerts you that the limit of traction is about to be reached, so you don’t end up sliding into a ditch. 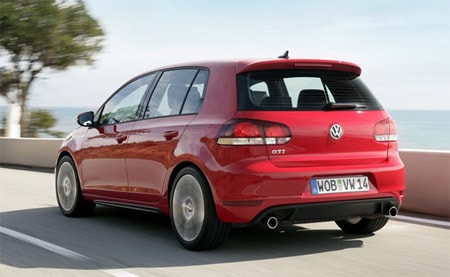 So handling wise the car hits the nail on the head once again, but performance was the one area where the Mk5 needed attention since it was outperformed by the other hot hatches. VW’s answer was to make the engine 3kg lighter and adding on a supercharger to the turbocharged 2.0l engine increasing the power output to 155kw and 280Nm torque, with the torque kicking in at 1800rpm. This launches the GTi from 0 – 100km/h in 6.9 seconds and takes it to a top speed of 240km/h. In the DSG model, which is the same one I drove, you get a dual clutch semi-auto gearbox, so the one clutch is leading while the other preselects the next gear, making gear changes smoother and quicker.

As both a family and performance car the Golf GTi is an absolute pleasure. With a 275 liter boot, loads of legroom and an impressive 6.1 liters per 100km, it’s a perfect blend of the two. You can really point its nose in the direction you want to go and shoot at it. Safety features include ABS, EBD, ESP, adjustable whiplash optimized head restraints and 7 airbags, making the GTi one of the safest cars ever built and giving it 5-star Euro NCAP rating.

There are a couple of other cars to choose from in the same price class as the Mk6 GTi, but for a balanced combination of speed, luxury, reliability and practicality I’d say the GTi is certainly one of the best.