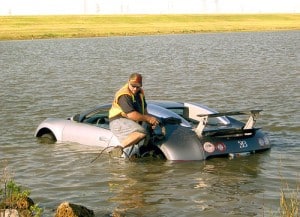 The Bugatti Veyron driver has been identified being Andy House, the owner of Performance Auto Sales in Lufkin, a company that restores wrecked exotics.

Couldn’t spot the pelican he claimed causing him to swerve as he said earlier. The man’s handphone had slipped out of the car’s centre console and he reached to retrieve it from the floorboard, Houston Chronicle reported.

When he sat up, he was startled by a pelican flying low alongside the Bugatti and the front tyre subsequently strayed onto the shoulder of the road.

The man couldn’t regain control, the police told Houston Chronicle. There were no indications that the driver was speeding. (He should still be arrested)