Fancy what happens when you put the Lexus LFA and a Nissan GTR on a test track?  This is exactly what the guys at MotorTrend did. Pitting the Lexus LFA against almost compatriot Nissan GTR is sure to throw up interesting results. Amazing results ensue, indeed, we got to see. 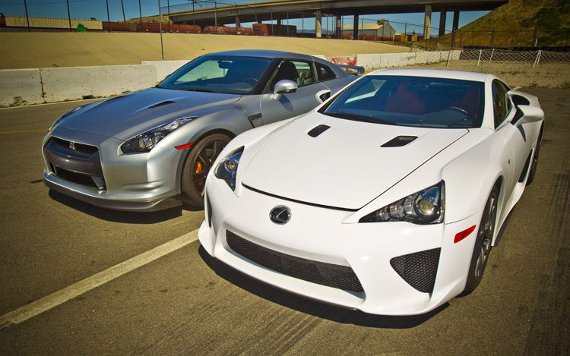 The super car-like Lexus LFA, which is to come for around $400,000, has proved that it’s the best on track by finishing a notch ahead of the Nissan beauty over the quarter mile. The performance of the Lexus LFA may be attributed to the 10 year’s worth of research and development that had been on at the Lexus stables in Japan.

Along the test track, the Lexus LFA might  seem like it lacks the pull compared to what the Nissan GTR boasts of, but it still impresses with a table flat torque curve, with 90% of max delivered before 4000 rpm, according to MotorTrend.