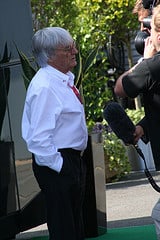 Slavica and Bernie Ecclestone have been together for the last 24 years, but unfortunately that doesn’t make a marriage last.

During Brazil’s championship, Mrs. Ecclestone (50) – a former Armani model, has moved out of their Kensington (UK) home and we have the confirmation that she has already filed for a divorce in November. “It is formally announced that Mrs Slavica Ecclestone has filed for divorce,” a statement released by her PR agency Borkowski read.

Meanwhile, I suppose Bernie is trying to see what can be “saved” because for tax reasons, most of the wealth is on his wife’s name. Bernie was pretty surprised when he found out that Slavica is divorcing him.

I wonder what’s going to happen with all those money, don’t you?