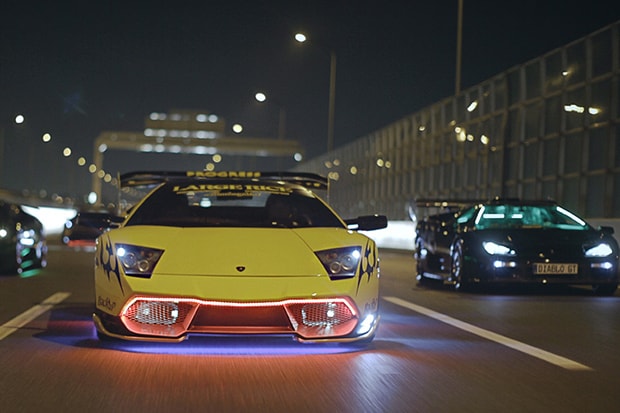 Japan’s underworld is home to many things and many, how should I say, eccentric people. Whether it’s social billionaires, thrill-seeking daredevils or, in this case, flashy yakuza’s (yakuza being an organized crime syndicate).

This gang, operating in Tokyo’s underworld has always had a penchant for fast cars or bikes. However, recently, it seems that the yakuza are having some sort of internal competition as to see who has the most blinged-out car. There preferred mode of transport? Lamborghini’s of course.

The gang was originally some sort of motorcycle gang, but quickly transitioned into more flashy (and more expensive) automobiles. Going from a daring motorcycle club to Lambo-racing criminals will obviously come with new threats and in this case, super flashy style.

Japan-based director, Luke Huxham, was lucky enough to be invited by the gang themselves, to shoot a mini documentary about this blaring, blinged-out underworld.

Huxham was introduced to a member of the gang named Morohoshi-san, who then invited him to come and see what’s happening beneath the frontiers of Tokyo City and, of course, bring his camera with. The result was a short documentary showcasing the gang’s undeniable love for fast cars and flashy customizations.

As if a Lamborghini in itself isn’t flashy enough, these cars have all the trimmings and extra’s you can think of. Think vinyl wrapped cars, colored LED’s and flashing lights (like, everywhere) and you’ll kind of get an impression of what it’s like in this glitteratti filled under belly.

While no one really knows what illicit activities Morohoshi-san and his mates do to earn enough cash to buy Lamborghini’s and have them pimped out, we are absolutely sure it’s anything but legal. However, that doesn’t stop us from gawking at these incredibly flashy customized Lambo’s. After all, we’re just looking…

You can watch the documentary below. Keep an eye out for the holographic wrapped Lambo and the shiny, leopard print beast in the opening scene: