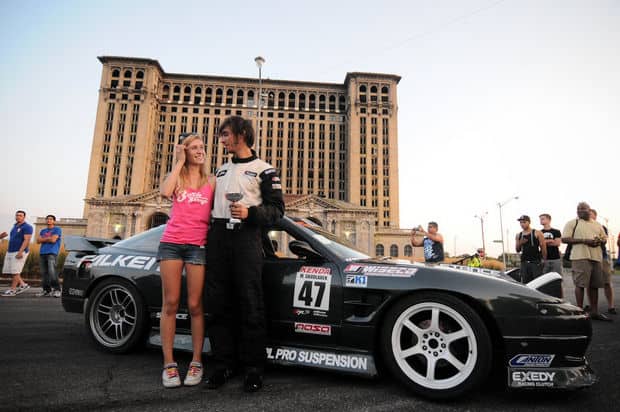 This could quite possibly be one of the coolest video’s we have posted.

The annual Woodward Dream Cruise in Detroit, Michigan, is the world’s biggest one-day automotive event that draws more than 1 million spectators and over 40 000 classic cars.

However, one of the coolest events at this year’s Dream Cruise (which is held annually on the third Saturday of August) was the Midwest Drift Union’s drifting event.

While they were laying down some rubber on the streets of the historic town, with the Michigan Central Depot as a backdrop, an eager crowd gathered to witness the ‘Streets of Detroit’ drifting competition.

The venue was perfect, as the broad, sweeping turns and tight-angled streets in front of the 18th century train station provided the drivers with perfect and exciting turns and twists.

The drifting competition was beautifully captured by a drone, giving us the pleasure of watching from a birds eye view. The aerial videography is ideal for an event like this and the amazing video will give you more than a couple of thrills!

Check out the aerial video below:

The ‘Streets of Detroit’ competition was eventually won by a 22-year old, Mike Skudlarek (pictured above) of Plymouth, Michigan. Mike drove a LS3-powered Nissan 240SX.