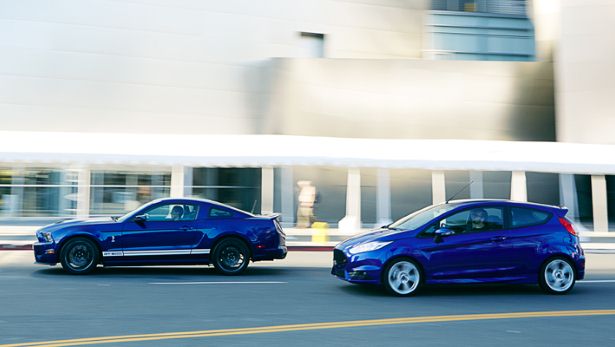 Racing fans will perhaps love American automaker Ford for two things: the fact that they gave us the incomprehensible (and let’s not forget legendary) Mustang and, in more recent times, the wonderfully fast and potently powerful Fiesta ST.

It’s almost weird to think that one could actually compare the two. While the Mustang is a beautiful and powerful, albeit classic muscle car, the Fiesta ST is more modern, and, if you want, in a league of its own. But just what if these two were to face off against one another? Surely there would have to be a common denominator.

Well now there is.

For the first time in 30 years, Ford has offered a turbo-charged Mustang.

In order to truly test the power and ferocity of the new Ford Mustang EcoBoost, it will have to be pitted against one of Ford’s best; the 2014, turbo-charged Fiesta ST.

While the Fiesta on its one is a force fro be reckoned with, this particular Fiesta has also had some hands on it, with it being tuned by Cobb Tuning.

So, in order to find out if it may be worth it for race-loving petrol heads to switch from the world wide favourite the Fiesta ST to the newly super charged Mustang.

Matt Farah takes on the challenge for the Drive channel to determine if the newly tuned Mustang can give the trusted Fiesta a run for its money.

Check it out below: