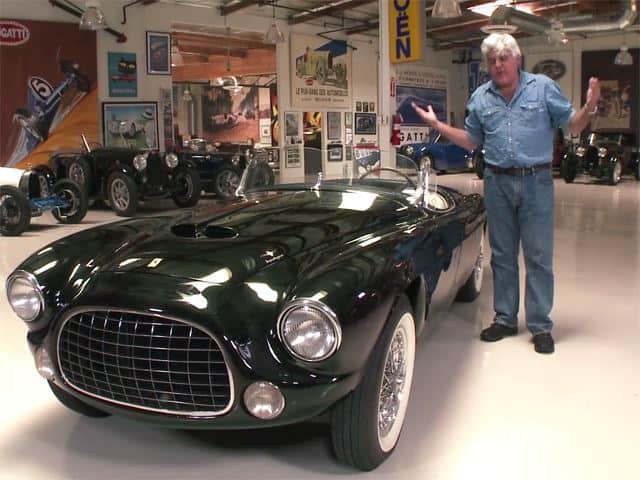 It seems as though Jay Leno’s privileges (or luck) just seems to get better and better.

While we are already insanely jealous of his incredible car collection – and not even to mention the fact that he basically gets to drive any collector’s car his heart desires – the little green monster inside of us turned a different shade of green after we saw this. And it’s not because the car itself is green.

The ex talk show host recently had the opportunity to take a very, very rare Ferrari for a ride about town.

Now when we say rare, we mean really rare. This is a 1952 Ferarri Barchetta – a one of a kind, once off, special edition beaut that belonged to none other than Hnery Ford II. And what’s even more astonishing, is the fact that it was given to Ford as gift by Mr. Ferrari himself; Enzo Ferrari.

Apparently, this glorious gift was given to Henry Ford II when the two car companies were allegedly in talks about a possibly merger. While we know the outcome of the supposed merger, the Barchetta is a wonderful reminiscent of the era that saw magnificent cars with classy, classical finishes.

The car, which is on loan to Leno from the Peterson Automotive Museum in Los Angeles, California, is pretty powerful, too.

It features a 2.7 liter V12 engine (!)and really is the epitome of a 1950’s roadster. With it’s beautiful, curvaceous body and sublime interior, this car will make anyone riding in it like royalty.

And it seems that Ford himself was pretty taken with the Barchetta, too. Some critics and historians even believe that the Barchetta was an inspiration for one of Ford’s most iconic cars – the Thunderbird.

Nevertheless, this car is painstakingly beautiful and looks like a dream to drive in.

You can check out a video of Leno having fun in the Barchetta below: