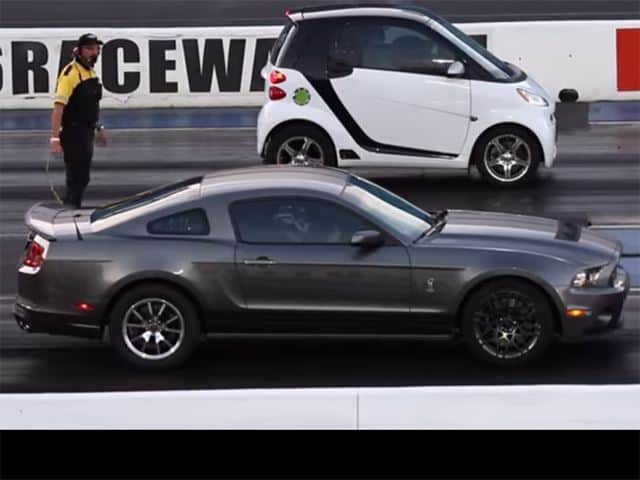 So, generally speaking, there aren’t many vehicle enthusiasts (or everyday people, for that matter) that hold the Smart Car in a high regard. In fact, many people and critics a like think the tiny car is cute – when you’re 16.

However, what if the Smart Car, in all it’s petite glory, had a bit of a make over in the engine department. Would you consider driving one of them then? Probably not. But this next video might make you think otherwise.

A revamped Smart Car, sporting a 1.5 liter, four cylinder, super-charged Toyota engine, takes on a Shelby Mustang on drag strip. and while you think you might know who the winner is in this race, you will most likely be wrong.

The Smart Car and Mustang faced each other in a clean cut drag race, and, defying all it’s critics (and possibly the laws of physics) the demure little Smart Car absolutely destroys the Mustang. Believe it or not!

And what’s more, the little car shows that it has some big guts and does a wheely (yes, a wheely) right after it pulls away.

Check out the video below: